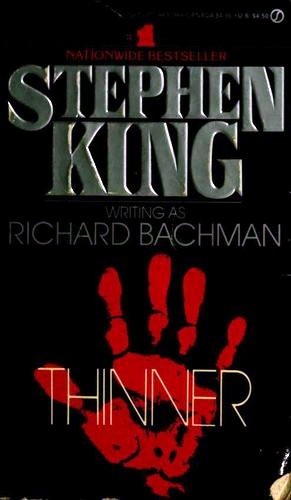 Billy Halleck, good husband, loving father, is both beneficiary and victim of the American Good Life: he has an expensive home, a nice family, and a rewarding career as a lawyer...but he is also fifty pounds overweight and, as his doctor keeps reminding him, edging into heart attack country.

Then, in a moment of carelessness, Billy sideswipes an old gypsy woman as she is crossing the street--and her ancient father passes a bizarre and terrible judgement on him.

"Thinner," the old gypsy man whispers, and caresses his cheek, like a lover. Just one word...but six weeks later and ninety-three pounds lighter, Billy Halleck is more than worried. He's terrified. And desperate enough for one last gamble...that will lead him to a nightmare showdown with the forces of evil melting his flesh away. And away. And away... (back cover)

4.5 I think. One of my favorite King books. I enjoyed it just as much this time as I did when I was a teen and read it for the first time.

This is a fairly short and tight read, just what you'd expect from an early Stephen King. The premise is simple: an overweight man gets cursed by a gypsy and starts to lose weight. The characters are well developed, the plot moves fast and is interesting throughout. It's a great premise and a solid book but definitely not his best. Recommended to all King fans, of course.