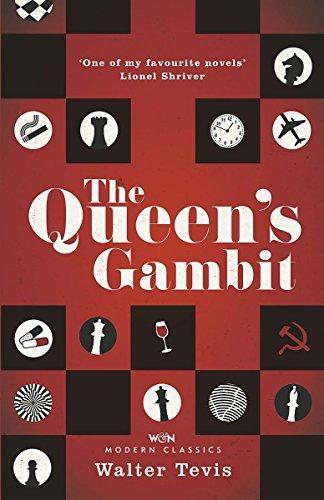 The Queen's Gambit is a 1983 American novel by Walter Tevis, exploring the life of fictional female chess prodigy Beth Harmon. A bildungsroman, or coming-of-age story, it covers themes of adoption, feminism, chess, drug addiction and alcoholism. The book was adapted for the 2020 Netflix miniseries of the same name.

A n interesting read, although I think, tbh, that the TV series was more dramatic. There was, if memory serves, a less dramatic ending. But the character was very interesting and the setting very evocative, and, as with the series. It did an amazing job of bringing the cerebral gymnastics of chess to life.

Wow. Like so many, The Queen's Gambit was added to my tbr pile mountain thanks to the incredibly successful Netflix adaptation (which I still need to actually watch) as I wanted to know more. Why was this being raved about? Why had it caused a huge demand in chessboard sales etcetera.

The answer to all of the questions I had is simple. Walter Tevis wrote an incredible tale that draws you in from your first encounter with the young orphan, Beth Harmon whose entire life is turned on its head with the death of her parents.

Wow. Like so many, The Queen's Gambit was added to my tbr pile mountain thanks to the incredibly successful Netflix adaptation (which I still need to actually watch) as I wanted to know more. Why was this being raved about? Why had it caused a huge demand in chessboard sales etcetera.

The answer to all of the questions I had is simple. Walter Tevis wrote an incredible tale that draws you in from your first encounter with the young orphan, Beth Harmon whose entire life is turned on its head with the death of her parents.

The character development and world-building are immersive and Tevis's writing skills ensure that you see events unfold before you and awaken and trick your senses so you're living in 1950s/60s America with the Cold War making America wary whilst it still recovered to a degree from the aftermath of World War II as well as the country is caught between all its citizens have ever known and the fight for freedom.

There are references to drug and alcohol addiction as Beth struggles with various ways to cope in a world that to me, Tevis has her struggling to be a part of. Highlighting the very real problem albeit at the fictional Methuen Home for Christian Girls, of tranquillisers being given daily to the orphans to keep them calm; Tevis truly throws light on how many children will have struggled with addiction due to the practice occurring regularly throughout America up until the 1970s (from what I can learn) which is truly terrifying. The addiction Beth struggles with appears to have been a regular problem for children when they left such places as the fictional Methuen and Tevis handles this delicate topic in a good way even though it's traumatic to see how the pills would affect Beth.

I would strongly advise anyone who has struggled with alcohol and/or narcotic addiction to thinking carefully about reading The Queen's Gambit as it could be potentially detrimental.

I'm not a chess player and sadly I cannot seem to understand and recall the rules well despite really wanting to play what is deemed to be one of the hardest games out there but that problem doesn't distract from the wonderfully descriptive way of explaining both how Beth learns to play and understand Chess initially and later, become a phenomenal champion against the odds of age and gender as a couple of examples. It made me want to desperately try again to learn and it's this I think that made people rush out to learn and purchase boards. Tevis manages to make Chess sound seductive, that there is an allure and magic to the game and it's again, wonderful examples of his writing skills.

There is something about this book that holds you, I couldn't put it down even when I found elements of it hard to read, that affected me in ways I'd hoped it wouldn't. I think that is part of what held me though - I needed to see Beth fight from every adversity, every pitfall that life, the people around her, and Beth herself put before her.

Beth Harmon is more than a talented chess master she is a warrior of her creation.

I do however struggle with one element that occurs early on when she's in the orphanage and it's that of sexual assault. It's brief and it's surprising how it occurs as you don't see it coming or I didn't at least. It to me, feels forced into the narrative and adds little to the story because it's done, and never brought up again. It doesn't shape Beth nor those around her and I felt like it was gratuitous.

Again if you have been the victim of assault (in this case the aggressor is the same sex as the victim) please read with caution.

Overall though, The Queen's Gambit is an incredible read that made me feel a lot more than I expected and gave more than I imagined in its telling.

Enjoyable book that follows the Netflix series pretty well. If you're going to give it a shot - and if you're a fan of the show or of chess, you might want to - go with the eyeball version. The narrator left a lot to be desired. I think I would have enjoyed a text-to-speech reader more.

I listened through the Audible Premium Plus catalog so at least I'm not out a credit...